I’m sitting on this Sunday after exercising and doing my Yoga and all I can hear is the sounds of my hummingbird’s attacking each other. They are posed for fight, tails spread. Their so…

Source: May Peace be with You

I’m sitting on this Sunday after exercising and doing my Yoga and all I can hear is the sounds of my hummingbird’s attacking each other. They are posed for fight, tails spread. Their sounds of hitting each other while their wings rapidly flutter is  a constant whir in my consciousness. They are relentless. I’m just relaxing and trying to read, but I cannot because I’m endlessly fascinated by their behavior. They never let up. They are little gangs of brutality and beauty. 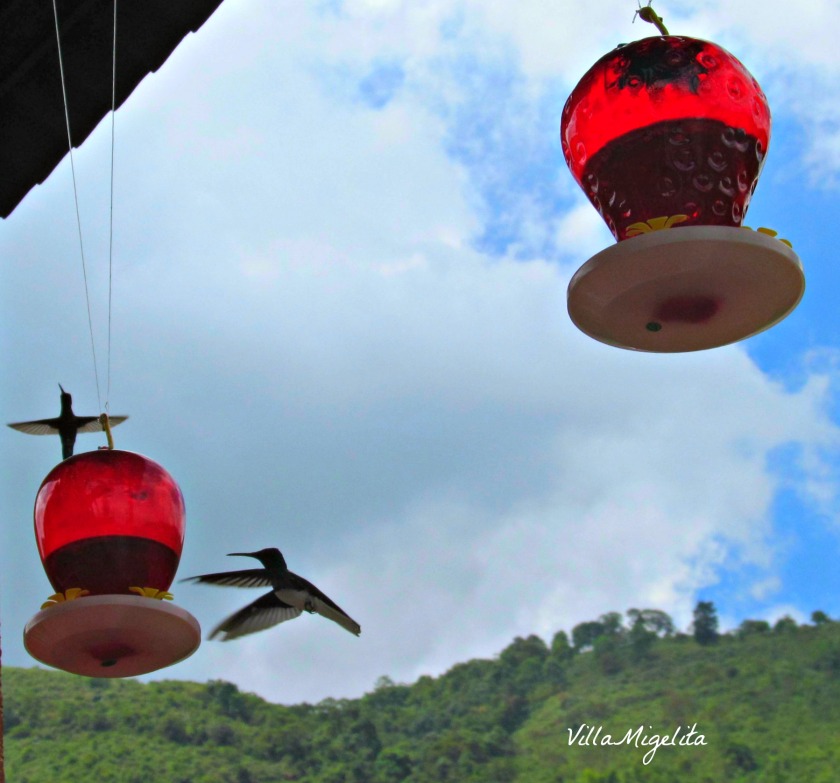 I have hummingbirds year round. The many species I have interact and accept each other as best they can. I’m an impartial observer. That is why I find them so interesting. Sometimes they drink from my feeders without much fighting, but today that is not the case. They all are militant like fighter jets bombing the enemy. My presence so near is not even acknowledged. They are going for the feeders like it is their last meal.

As I am distracted by them, I have a lot of thoughts running through my brain. They actually remind me of how people are responding to this presidential campaign going on now in the United States. They are ready to kill for the nectar, just as people are ready to give up friends and family for their beliefs about this election.

Maybe I have mellowed in my life since I’ve moved to Paradise, but one thing I have learned is you are not going to change anyone to your way of thinking. Just like my hummers. They are not going to stop fighting for their time at the feeders, taking that precious sip of nectar. Let it go. Vote your choice and be done with it. Hopefully, the world will survive just like my very aggressive hummingbirds and we will find something else to be scandalized about.

Me, well I’m aggrieved that there is no true fairness in this world. Some people win and some people lose. I lost in my quest to get the murderer of my daughter in jail. It breaks my heart, and there are many just like me who have not seen justice. We go on. Just like those hummingbirds who fight every single day for the chance to drink the nectar. Let your life become about good things, peaceful things, happiness. Stop trying to make everyone see it your way. It’s not important. What is important is being a good human.

Sometimes my hummingbirds are peaceful with each other, they sit nicely while they all feed together. Let us try to be that way with our lives. They often sit peacefully together drinking nectar and flying off to rest on a branch.  My home is a place of peace where the hummingbirds entertain and amuse all who visit.  I’m certain they are not worried about the other species, sizes, sex , or colors of those they battle with to get the feeders to themselves. Maybe, just maybe, us humans should look to nature more often. The fighting seems to be a bit more fair. No prejudice involved, just wanting to have a place to feed. That is why I have so many feeders: I give them all an even chance. What they do with that chance is a decision they make. What happens in this world is kind of like the hummingbirds, it is all out of our control even when we want so much to have the control. Just do your part and vote. Then let it go. Don’t lose friends over this. It is not worth it. 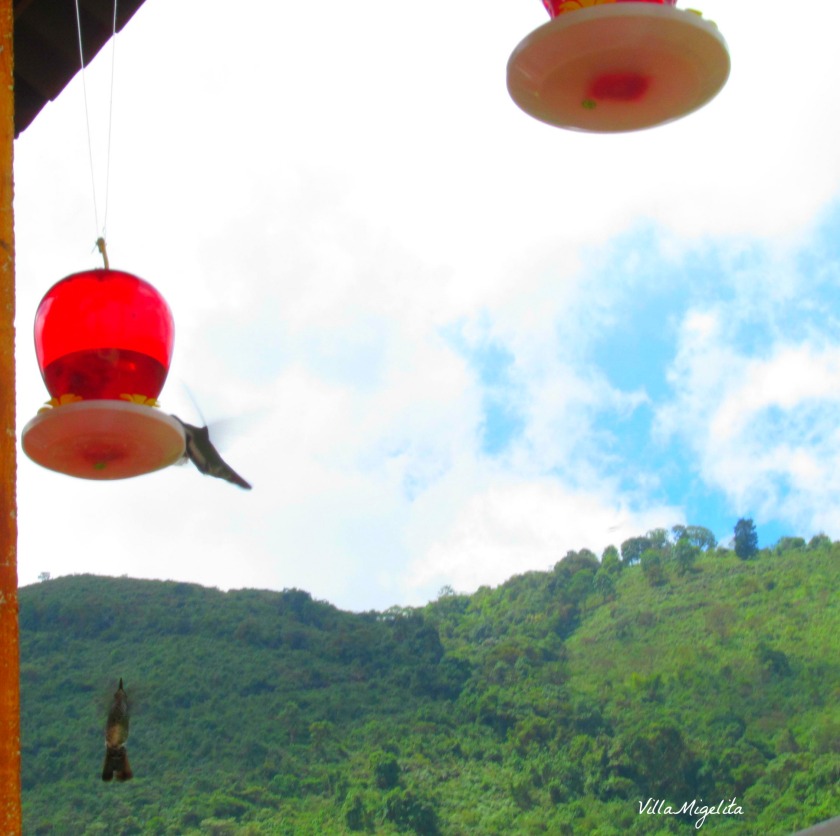 I’ve come to the conclusion we all think differently. We have brains that look at the exact same message and process it in completely different ways. If we only associate with those who think exactly like us, what do we learn? I’m all for freedom of speech, but I remember my mother and father always saying to me “politics and religion are not to be discussed with others ” and I have to agree. It is just not worth it. When I was younger I didn’t know what any of my friends believed. Because we were just having fun and liked each other for the people we were.

I’m certain we can choose to do this again. With social media it is difficult: but you can stop the hate by posting good things, happy things on the Internet. If you are offended bite your tongue, let it go. Let peace become your way of life, not hate. Hate never wins, even when you are seeing so much of it. Just let it go. Let peace be with you. 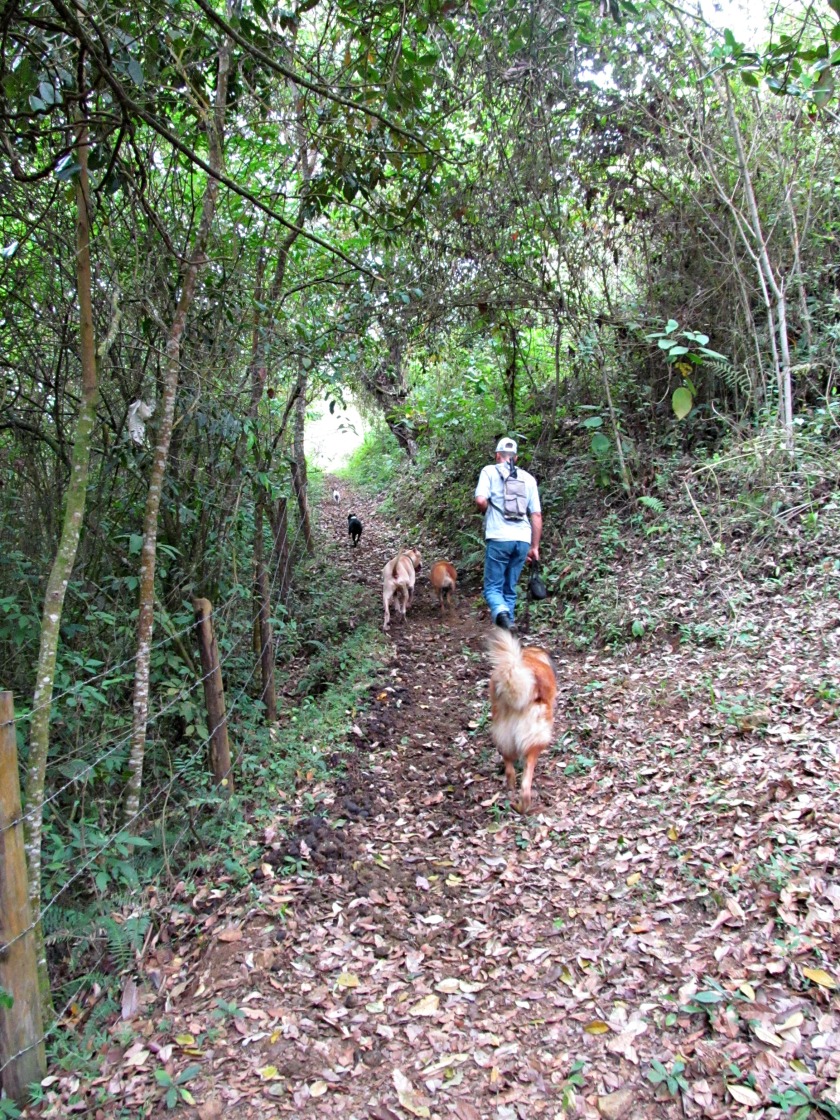 Life isn’t a narrow path upon which we walk in a certain direction. Life is curves and loops, a winding road to a quest which is impossible to predict. We can try our hardest to obtain our desires, but then something changes and so do we. We have to adapt to what is given to us.

We can take any direction, thinking it is the right one. But along comes a bump and that deviation changes everything forever. What we get is often not what we expect nor what we have planned for. We need to adapt. We need to think broadly in terms of our future. We can’t be limited in our observations of life and the world. We must be open to all possibilities.

There are lines we should not cross, immoral ones. Those are the exceptions. We have to stay true to our own moral compass and find our own truths. But we cannot follow a thin line. To follow that line without an ability to change is to become stuck without  experiencing everything you need to see in a life that can be way too short.

If we look at life in such a way that we know it is fleeting, then we can expand and grow. We can find ourselves even when we feel everything is falling apart. Because we are

the future, we have free will.

That is how I have adapted to the death of my daughter. I know she had free will. I was not responsible for her choices as she matured. I did my best, but I am still haunted. I always will be. I will never know if I could have changed the outcome. I will always think about the thin line. 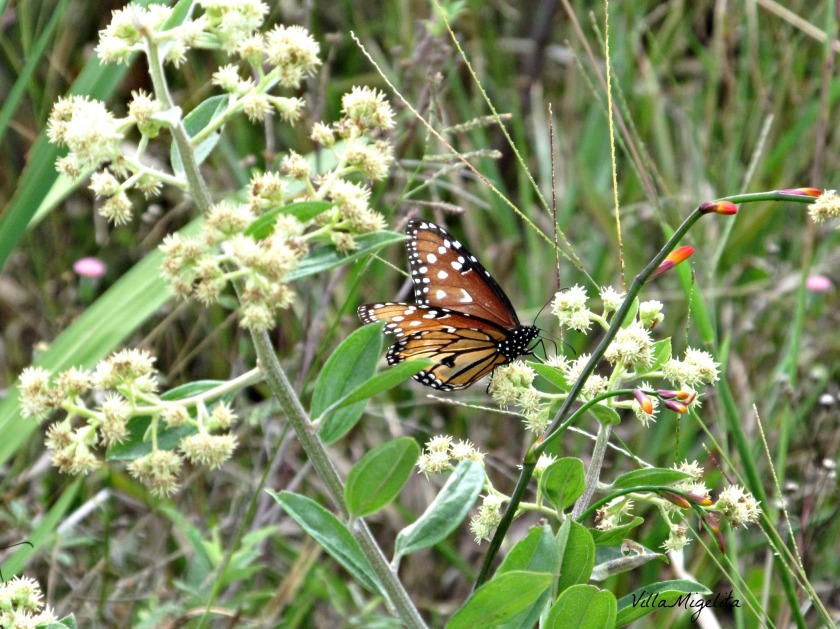 One of the most amazing natural details I have ever seen is this leaf. It is called Christ’s Tears or Las lágrimas de Cristo in Spanish.

A phenomenon of natural beauty and elegance that surprises with the intricate detail that is on the leaf.

Animals can show us so much  detail with their simplicity and kindness. The eyes have it all.

Raindrops on a rose. Detail that is lovely and calming at the same time.

With all that happens in our lives, we need to take a moment to look at the essence of the familiar that surrounds us. We need to embrace the beauty of normalcy. We need to let ourselves find joy wherever we can.

When I hike I see so much I can never capture in a photograph. I try. But the reality is you need to get outside and just look around. Let the moment you see something incredible stop you in your tracks. Take that moment and live it. Stamp it in your memory. Then you will understand the details of life. 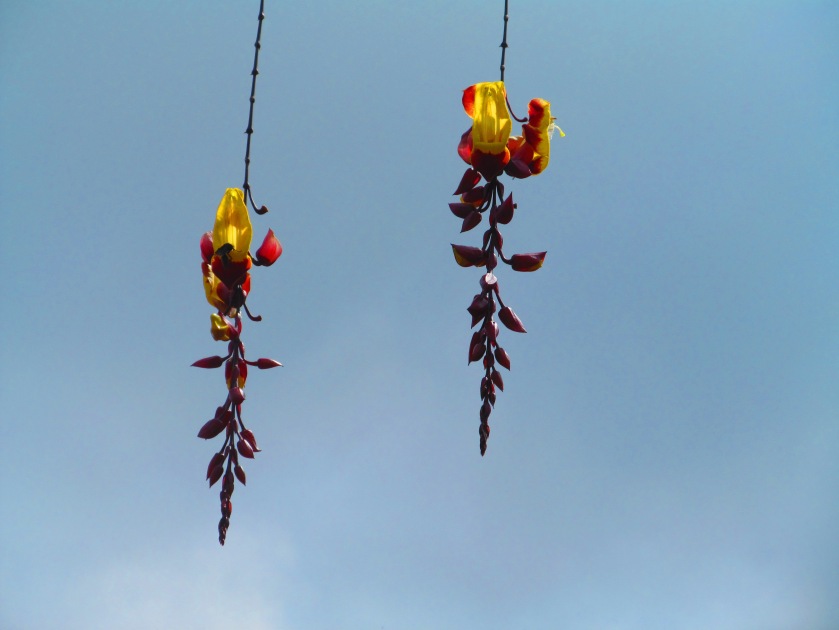 Looking up can bring you many images of beauty. Especially in my little pueblo in Colombia. I look up all the time because of all the bird calls. I always try to have my camera nearby to catch a video or photo of the many birds I see. Colombia has the most species of birds in the world. I see so many but I can’t always get them on film. The series above was taken while lying on the ground below the feeders…the images are not perfect but I like the way they show the spirit and spunk of hummingbirds. Hummingbirds are fierce little fighters!

Then there are the animals I always see on my hikes around my Villa. I am always photographing cows, goats, chickens and horses. They wander the mountains and streets grazing in complete freedom. It is truly delightful to see this when you visit Colombia.

Flowers and plants are always abundant here in Colombia. We have over 50,000 different varieties of plants and flowers. The colors are wonderful, and I don’t have to put any effort into any plant or flower to have them grow as the climate and soil allow flowers to thrive.

Most importantly I like the two words ‘looking up’, because that phrase brings good images to mind. In this world that is so full of suffering and random violence, looking up to see the sky, clouds, a sunset, nature and beauty can relieve us of anxiety; if only for a moment. So tonight when you read this take a moment to look up and see your sunset, or your stars overlooking the world and think positively. We must always save a little hope inside of us for humanity. Even when all we see is rampage and unresolved anger everywhere. Just look up and find the beauty around you, and let yourself feel the peace in that moment in time. 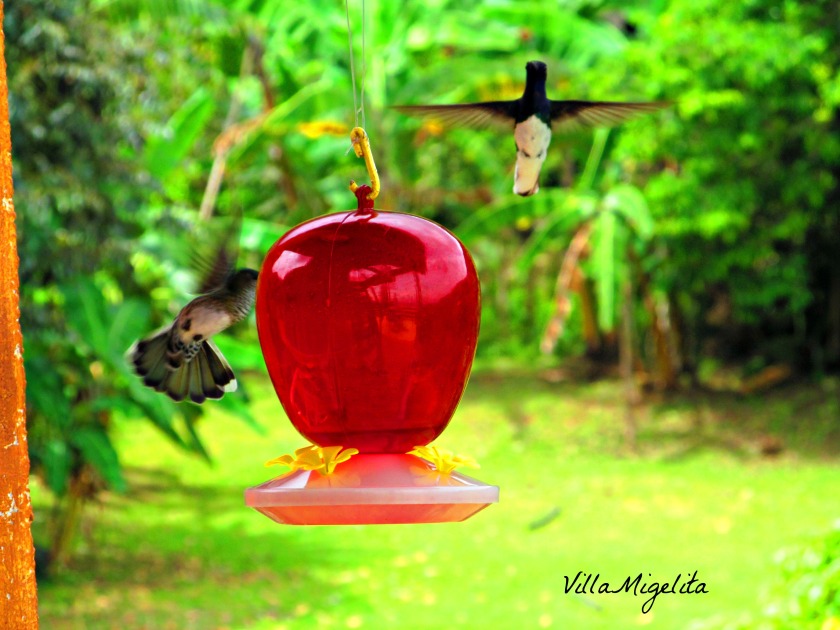 Nature. So many opposites are always confronting me. There are the  hummingbirds who are all different species here at Villa Migelita. They are definitely opposites! Even if they are the same species. They fight and fight each other all day long…and if there is a wasp they hover around it until they can find a time that is safe to land for their precious nectar.

Then there is the animal and human connection. However, we co-exist so beautifully. I love this photo that I took recently. Love is in the air! 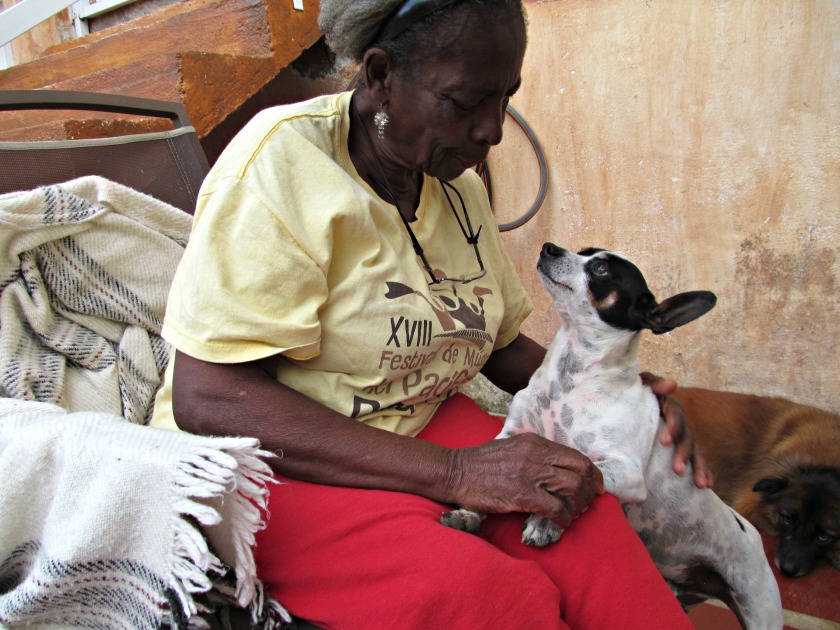 Then there is my bird Luci who is a total and completely fearless little being. She has clipped wings but that doesn’t keep her from being mobile. She is always terrorizing my dogs…sometimes she stands where they leave to go out to the yard and bites their feet when they pass…they run from her. It is really funny. I wake up every morning and smile when I see big Orion run away from her. 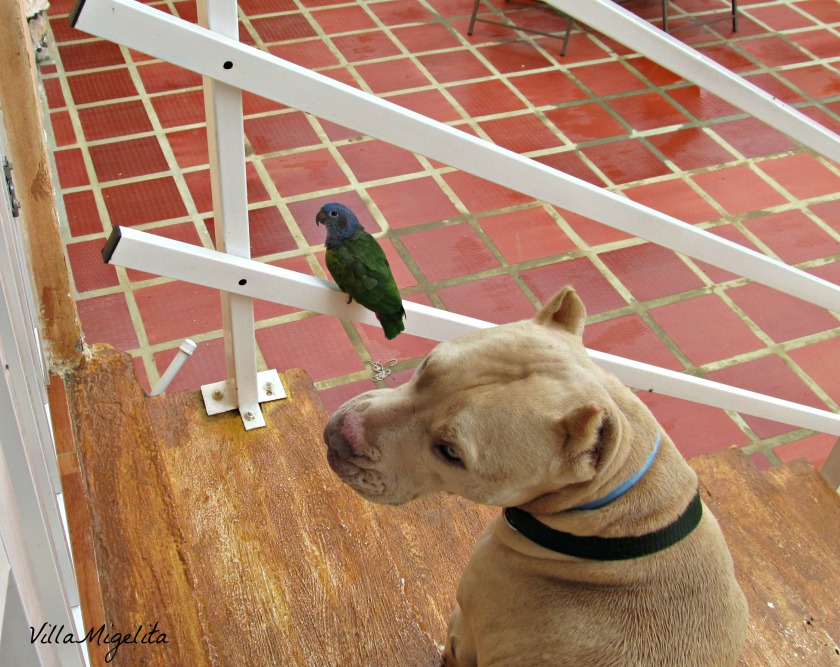 How about age? Here is a photo of me dancing with a man that is part of my family who is now 104 years old…amazing really. He still dances and enjoys life with zest…I could be his granddaughter!

I am an American who moved to Colombia to find peace after the devastating loss of my daughter. I bought and renovated a Villa, am learning Spanish, and writing as catharsis. This blog will be like a book with chapters. Each blog will be about my life in Colombia and my adventures. I hope you will enjoy the many new discoveries I am making every day about myself and another culture.